The campaign is where you’ll spend most of your early levels. Each chapter consists of 7 stages. Each of the first 6 stages will drop one piece of gear, and level 7, the boss stage, can drop any of the 6 pieces dropped in the other stages. Stage 1 drops the weapon, stage 2 drops the helmet, stage 3 shield, stage 4 gloves, stage 5 chest, and stage 6 boots. 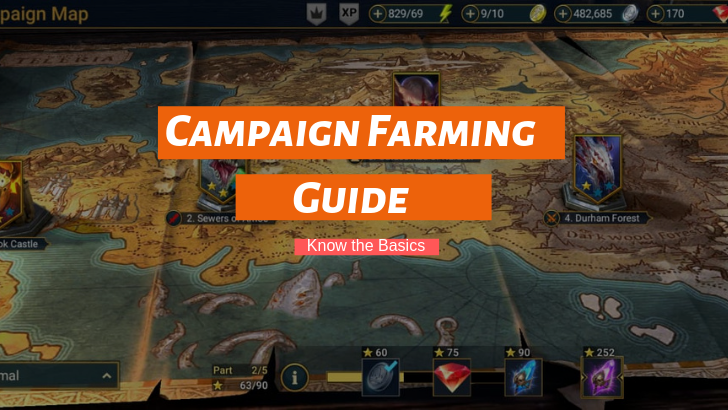 Stages 1-6 drop only common and uncommon gear, stage 7 has a chance at dropping rare.

Campaign is the best source of exp and is where you should be leveling your champions, or leveling your food. If all of your champions are not max level, just push as far as you can in the campaign, and once you hit the highest level you can beat, just run it until you’re max level.

If you’re leveling food you will need a farming champion. This is a champion who can effectively solo the level you’re farming. The idea is you will send this champion with 3 food champions, who will usually die in the first round, and then the farming champion will solo the rest of the stage.

The best farming champions are those with AoE. You want to be able to kill each stage as quickly as possible, to decrease your farming time. This can be either a champion with an AoE primary attack (such as Sinesha, Skullcrown, Saurus [although he may be difficult to gear sufficiently], etc) , or someone who has multiple AoE abilities. Counterattack champions are also effective, as they can retaliate against every hit, and ideally, kill each enemy that way. This is the main use of Executioner. Another option are champions who gain extra turns on kills, like Relic Keeper. These champions MUST be capable of killing every enemy in one-hit to properly farm, however, so there is a large gearing requirement. If you lack any of those, properly geared in lifesteal, most of the starting champions make at least competent farming champions.

If you are capable of one-shotting the entire stage on every wave of enemies, just build for attack (or whatever your main stat is) and crit/crit damage and try and do as much damage as possible. If you can’t quite do that and the enemies get a turn to hit you, you may need to equip your farming champion with lifesteal to survive.

Farming food champions should be done on the highest difficulty your farming champion is capable of soloing.

In each chapter there are two potential targets for farming exp and/or silver: the 6th stage will always give the highest exp (more than the boss stage, which also has a higher energy requirement, and so most people do not run it). However, the 3rd stage only gives slightly less, in most situations, but drops shields, which sell more than other pieces of gear. If you’re light on silver, consider farming stage 3 of the chapter you’re on and selling the shields, rather than the 6th stage.

People often think it makes more sense to farm dungeons for gear than campaign, because dungeons drop epic pieces, and why use a common when you could use an epic?

The reason comes down to energy efficiency and progress.

Unless you get a 5-star epic piece, you will eventually replace that piece. So the piece you replace doesn’t matter if it’s a 3-star common or a 3-star epic: it will get swapped out. So any energy you spent to get that piece is “technically” wasted. This is unavoidable to some degree, obviously you can’t START with 5-star epic gear. So minimizing the “waste” is the most efficient way. Farming gear in campaign, takes a fraction of the energy. You should be equipped in 5-star campaign gear before attempting to seriously farm dungeons for gear. This will allow you to press further in dungeons and get better, more permanent drops.

Think of the odds

In brutal campaign, you can select which piece will drop. So you know you won’t get gear you don’t need. It takes 8 energy per run. To get even a TINY chance of 5-star gear you need to be capable of running at least stage 7 of a dungeon, at 10 energy. But realistically, stage 7 will mostly drop 3 and 4 star gear, more than 5 star. You need to farm at least stage 10 to ensure that no more 3 stars drop, and now it’s 12 energy each.

Each run has a chance of dropping any of 6 pieces of 9 sets. So getting the piece you want has a 1/54 chance of dropping (and that isn’t counting when the dungeon drops green shards, or XP brews instead of gear), then that gear has to be the right star count, and then it has to be the right main stat for gloves, chest, and boots (1/8 chance for the gloves and chest, 1/7 for the boots), and all of that adds up to a TINY chance of getting the piece you need.

Now, it’s not quite that inefficient since even if you don’t get the piece you want for champion X, you might get a piece that would be good for champion Y, but meanwhile, champion X has no boots, or chest, or whatever.

You can gear more quickly, and more efficiently, by targetting the pieces you need and farming til it drops with the right main stat, and some decent substats. You’ll have to level it up a bit to see them, but you’ll get enough that it won’t be an issue.

It won’t be as effective as epic gear, but you’ll be probably 85-90% as strong, in much less time. Then you can use that gear to push to better farming stages in dungeons, down around floor 13+ and get better chances at proper, 5* epic gear.

In addition, on dungeons you can’t really farm food champions, you want to farm the highest level you can beat. But farming campaign, you can level food at the same time as you look for gear, doubling your efficiency!

Campaign is typically beatable just by raising rank and leveling your gear a bit, there aren’t bosses that truly require specific strategies so I won’t be addressing those here, but if you’re struggling in a specific stage, feel free to ask here in comment section.