Raid Shadow Legends Farming Guide – What Should I Be Farming?

This guide will be about farming (running stages over and over for experience, silver, artifacts, or whatever). Specifically, I’ll cover the different places to farm, why/when you should be farming them, and how to farm most effectively.

Farming (also called grinding) is the core of Raid, at all times you will be farming for SOMETHING; that might be for exp to level up your team, or to level up champions you intend to sacrifice to rank up others (commonly called “food” champions), or for silver, or for gear, or for scrolls. At the end of the day, you’re doing what you’re doing because you want something. But different time requirements, difficulty, energy costs, means that different places are more or less efficient at certain tasks. 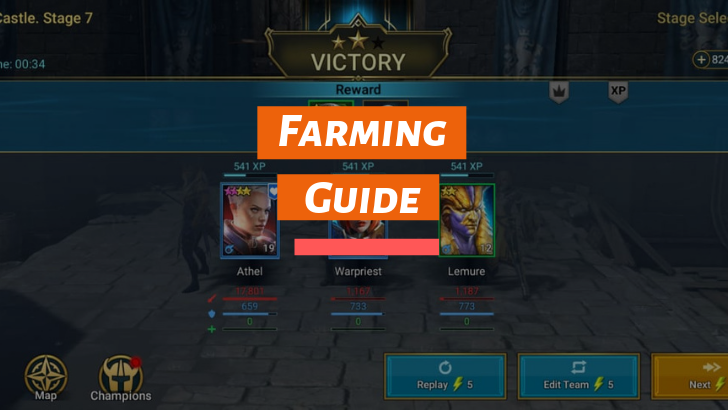 Farming is virtually always done on auto. If you can beat a stage, but can’t beat it with your champions on auto, it really isn’t a viable farming stage. Auto will go faster and save you time and effort. So anytime I state to farm at the maximum stage you can beat, I mean that you can beat on auto.

What Should I Be Farming?

This is a very common question in raid, there’s a ton of stuff to focus on! Do you farm for better champs, more silver, more levels, better gear?

I’ll do my best to break this down.

Rank ups are the single biggest increase to your stats in the game, and should always be your priority, particularly early when you have basically permanent double xp for a good week or two.

Until you’ve cleared normal campaign at the VERY least, you should barely know what the inside of a dungeon looks like.

Once you move into the mid-game and are starting to get some stronger champions you can work more on refining your gear. Farm hard and brutal for the correct pieces, equip your champions properly, level up the gear to +12 or so. You should still be focusing on ranking up champions; by this point you should be aiming for 6-star champions and trying to 3-star hard and maybe even brutal.

As you progress and have 3-starred hard, probably 3-starred brutal and have at least 2-3 level 60 characters, geared with gear that has the proper stats and is levelled up, you can start making serious attempts dungeons. You should start with potion dungeons to get your people ascended, and some limited spider runs to try and get the accesories to fill those spots, but don’t go crazy if you can’t hit the banner dropping stages yet, you’re just looking for place holders. You can also work on the other dungeons to work on replacing your campaign gear with epic gear. Don’t replace a good campaign piece with a crappy epic piece just because it’s epic. A 5-star common crit damage glove is better than a 5-star epic flat hp glove.

Minotaur you should only work on once you can clear stage 14 or 15 in under 4 minutes (ideally under 3). This is the longest grind in the game, but also one of the best rewards: giant slayer. The giant slayer mastery not only massively boosts your damage against Clan Boss, but also helps a huge amount in other dungeons as well. You’ll do a ton of extra damage against Skavag, the giant slayer procs count as an extra hit, so Fyro’s shield will go down faster. I’ll be covering more on masteries in a later guide.

If you are trying to farm silver and only silver, dungeons are your best bet. Run dragon and sell any artifact you get that isn’t good, the artifacts will often sell for over 30k each. You can sell an artifact from the victory screen by clicking the artifact and hitting sell.

People have asked if you can farm blue shards. The answer is technically yes, but practically no. Blue shards can drop from Ice Golem, Dragon, Fire Knight and Spider, but they have a very low chance to drop. Likely under 1%. They’re more of something that you can get as a side effect of grinding, not something you set out for. 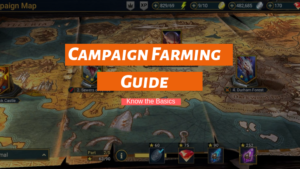 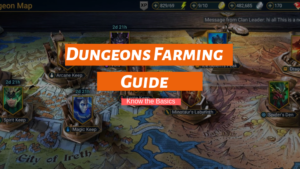