This Guide will help you to choose your First Starter champion for the game. Raid Shadow Legends is the best RPG game that requires lots of knowledge and patience in building champions. Assuming you are a new player in the game and you have no idea about how the game works and how to build your champions. And you have to decide one of 4 rate champion from a different class. so what you will do? randomly choose or will read this guide to understand which one is one and why. because this decision might slow your progress in the game. So without wasting further time let’s start.. 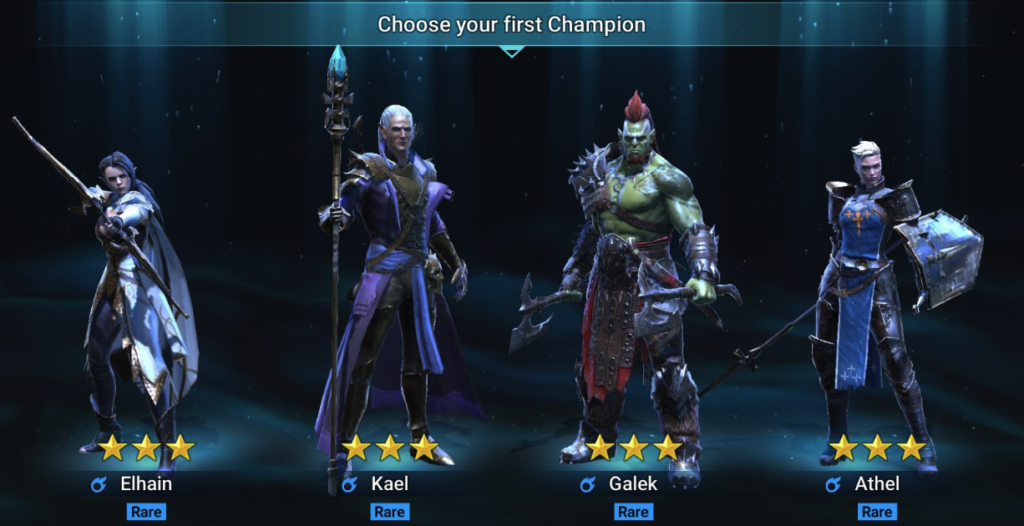 You will get an option to choose one of 4 champions Elhain, Kael, Galek and Athel. Before Choosing your first champion you should consider few things. Some champion works best in the early game and some works best in later stages.

Elhain is high elves rare attack partner. She is a Good Attack partner. Her 2 Skills do AOE damage to the enemies. She will be good in the early game to clear your early stages in the campaign.

Attacks 1 enemy and places another hit if she deals a critical strike.

Attacks 1 enemy then all of them (AoE) and if she kills the enemy, she will receive an Increased Critical Rate buff for 3 turns.

Attacks all the enemies 2 times.

Kael is a Dark Elves Rate Attack Champion. Kael also go AOE damage to the enemies but he does’t do direct damage like Elhain but he put a poison debuffs on the enemy. he might not be a good champion for your farming purpose. but could be the beast against bosses champion and in Arena. In a simple word he is best for later game.

Attacks 1 enemy with an 80% chance to poison the enemy for 2 turns.

Attacks all enemies and whenever an enemy dies, Kael’s Turn Meter refills for 25%. Also has an extra 15% chance to hit Critical hit.

Attacks enemy 4 times randomly, with a 40% chance to poison the attacked enemies for 2 turns.

Galek is also like Kael and that mostly good for putting debuffs on the enemy. He is also not good for your farming stages. For farming, you need high AOE Attack Partner like Elhain and Athel. Champions like Galek and Kael do the tricky part against the booses because with bosses you can’t win without a support partner.

Attacks all enemies and has 15% extra chance to place Critical hit.  places a 30% Speed buff on himself for 2 turns.

Attacks 4 times randomly, with a 30% chance to place a decrease DEF debuff on the enemy for 2 turns, with an additional chance of placing another debuff which decreases their Defense by 60%  if the target has more than 2 debuffs.

Athel is High damage champion just like Elhain. But she is the only one in the choice that self-buff. But if you compare with damage stat she is not as good as elhain. Elhain do multiple attacks on all enemies with a single hit while she only does one time. Most the people think her as a bad choice for early and later game. But in my view with a Life steal set of armor, she is better than Elhain. but getter correct Armor might take time.

Attack All enemies and has an extra 15% chance to hit a critical attack.

Places an Increase ATK (25%). Also, inflict  Increase DEF (30%) debuff on this Champion for 2 turns and if this Champion’s current HP is less than 50%. Gains an extra Turn.

So which is the best starter for Raid Shadow Legends

Above I have discussed all 4 Champion ability and their use based on the situation.  let’s again let me summarize things, In my opinion, you should go with either Elhain or Kael. Elhain will help you to clear champion stages quickly and help you to grow faster in early game. But trust me in later game she will be a trash champion. On Another hand, Kael is good for both early game and later game. but in the early game, you will need another attack partner to clear stages fast.

Elhain vs Athel – Both are Similar when it comes to the farming campaign. But Athel is better in killing clan bosses. Elhain is better than Athel in term of offence but sometimes she is weak while receiving damage, On the hand, Athel can put Increase DEF buff on herself.