Complete List of All Buffs & Debuffs in Raid Shadow Legends 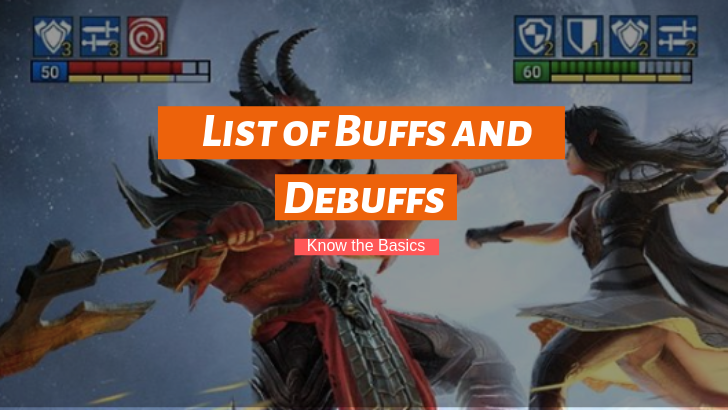 All Buffs In Raid Shadow Legends

A Buffs is a Positive effect which can be applied to an ally or on itself by the champion. In Raid Shadow Blue Colored effects are Buffs and each image represented a separate effect.

The Caster Champion takes 25/50% of direct damage inflicted upon the Target Champion. Self-inflicted damage and Poison do not trigger this effect. Each Champion uses their respective DEF values for mitigating damage.

The champion will be immune to all type of damage.

The champion will be immune to all type of Debuffs.

when a champion gets attacked, he will strike back with his first skill and deal 75% of the damage of first skill. Counterattack will happen once if the enemy hit multiple time with skill. Also, counterattack doesn’t count as Turn.

Heals the target Champion by 7.5/15% of their MAX HP at the beginning of their Turn.

Increase Attack( Current ATK value including all effect ) of Champion by 25%/50%.

Any Champion who hit the target who has this buff will receive reflected damage of  15%/30% of total damage.

Applies an HP shield on the champion. so when the enemy hit on champion damage will first be taken by shield then as from normal hp.

If the champion dies with this buff. he/she will revive immediately with 30% of his max HP and 0 turn bar.

The Champion with this buff cannot fall below 1 HP for the entirety of its duration.

All Debuffs In Raid Shadow Legends

these are the list of debuffs that can be applied on the enemy champion.

When this debuff expires the next hit the enemy receive will do high damage. the damage will ignore the enemy defense.

Damages the target champion by 2.5/5% of the max HP at the beginning of their rounds. the More Max HP enemy has the more damage will be as it’s based on max HP.

Any Healing received by the Enemy will be reduced by 50/100%.

No Buffs will be applied on the champion with this debuff.

Enemy Can’t take any action when his turn meter full also CD skills turn will not reduce. Damage received will be 75%.

While the debuff is active and at the start of the affected Champion’s turn, the enemy and all their allies take damage equal to 3% of their respective MAX HP. There can be only one [HP Burn] debuff active of a Champion at a time. However, if multiple Champions on the Team are debuffed with [HP Burn], all of these debuffs work as normal and apply their full damage.

The Champion with this debuff can only attack the Champion that applied it for X Turns, using their First Skill.

Any Champion that attacks a Champion with this debuff heals for 10% of inflicted damage.

Champion with this debuff not able to take action until it has been attacked by someone. Cooldowns are not refreshed while [Sleep] is active. But other debuffs like poison will work as normal.

The Champion with this debuff is unable to act X Turns. Cooldowns are not refreshed while [Stun] is active.

Increases damage received by the Target Champion by 15/25%.

These effects can only be found in Minotaur stage.

While active, this buff increases the damage the Minotaur deals by 400%.

While active, this debuff increases the damage the Minotaur receives by 200%. The duration of this debuff cannot be increased.