There are major changes done in this update related to artifacts arrangement and upgrade system. Also, there is a new feature “faction war ” and new item “Glyphs” has been introduced. Other than, game balance and minor bugfix.

Faction Wars is a new game mode, accessible by players of Level 6 and above. A new battle map with 12 Crypts is made available to you – a single Crypt for each major Faction. However, the number of Crypts may increase in the future as more Factions appear in RAID: Shadow Legends. Each Crypt consists of 21 Stages, and every Stage has 3 Rounds – much like the Campaign Battles you’ve seen before.

A Faction Wars cycle lasts 6 days, and certain Crypts are only available on certain days. The order of availability is automatically drawn up at the beginning of each cycle and it is not set in stone, unlike Affinity Keeps.

Currently, Crypts are opened in pairs. Note that no Crypt can be open for two days in a row, so whatever Crypts were available on the last day of the Faction Wars cycle will not be selected for the first day of the next cycle.

Crypt Keys are required to fight Faction Wars battles, and it’s important to remember that every Crypt Key can only be used to access a corresponding Crypt (Banner Lords Crypt Key for the Banner Lords Crypt). Each player gets 12 keys per available Crypt at the start of the day and cannot go above the limit. These keys are automatically refreshed when the Crypt closes, so no matter how many keys you’ve spent, you will always have 12 on the day that specific Crypt is available again. Note! Keys are not burned if you lose the Battle, they are only spent when you win.

In addition to normal loot, you can earn Stars for completing Stages and meeting certain conditions (much like you do in the Campaign). The requirements are as follows:

Glyphs are powerful new items that can be used to enhance a specific Substat of Artifacts and Accessories. They can be obtained by beating Crypt stages in the Faction Wars. To do so, you need to select the desired Artifact and go to the Enchantment tab. From there, you can select an appropriate Glyph and proceed to Enchant your Artifact. The Glyph must fit the following conditions:

Each Glyph has a certain Upgrade range. For example, an ACC Glyph may enchant your Artifact and add a random bonus between 10 and 15 to its ACC Substat. The Glyph is lost upon a successful Upgrade, though if the value of the bonus did not reach the possible maximum, you can use another Glyph to attempt the same upgrade.

For example, if the first Glyph gave you a bonus of 11 ACC, you can use another Glyph of the same Rank again. If you are lucky and the next bonus is greater than 11, the Artifact will be enchanted once more and the corresponding Substat increased.

There is no limit on Enchantment attempts, as long as you have the required Glyphs and Silver.

Some Champions can conjure primal terror in the hearts of their foes, be it through magic or simply being too horrific to look upon (or frighteningly righteous!). If a Fear debuff is successfully applied, it has the following effects:

Fear. When a Champion with this Debuff attempts to use a Skill, there is a 50% chance that the Skill will not activate and the Champion will lose their turn

True Fear. When a Champion with this Debuff attempts to use a Skill, there is a 50% chance that the Skill will not activate and the Champion will lose their turn. The Skill that they tried to use goes on cooldown

We have made several important adjustments to the Artifact Inventory in an effort to simplify and make it more convenient for our players.

You access it from your Champion Collection, by selecting any Champion and tapping on an Artifact or Accessory slot. From now on, you will have the option to view Artifacts, Accessories, and Glyphs, no matter which slot you’ve tapped – simply select the desired icon. 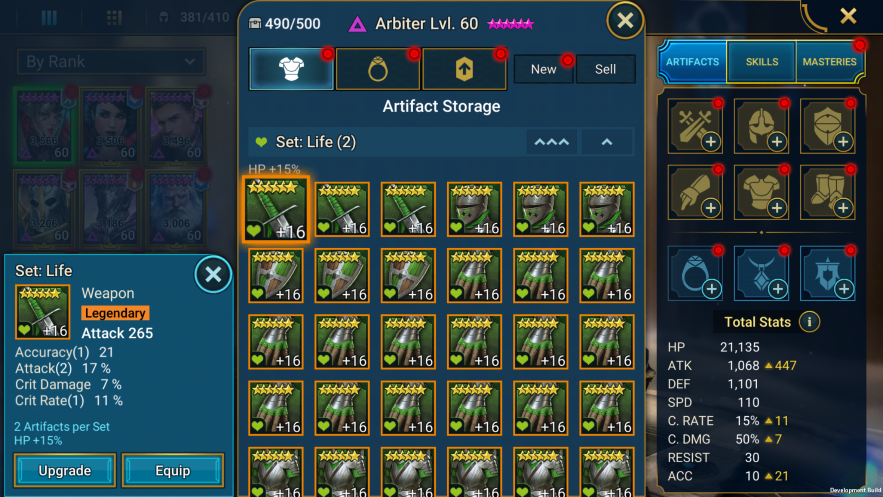 New Artifacts can be viewed by tapping the “New” button. It will remain selected and only Artifacts, Accessories, and Glyphs, that have not been viewed yet will be displayed. 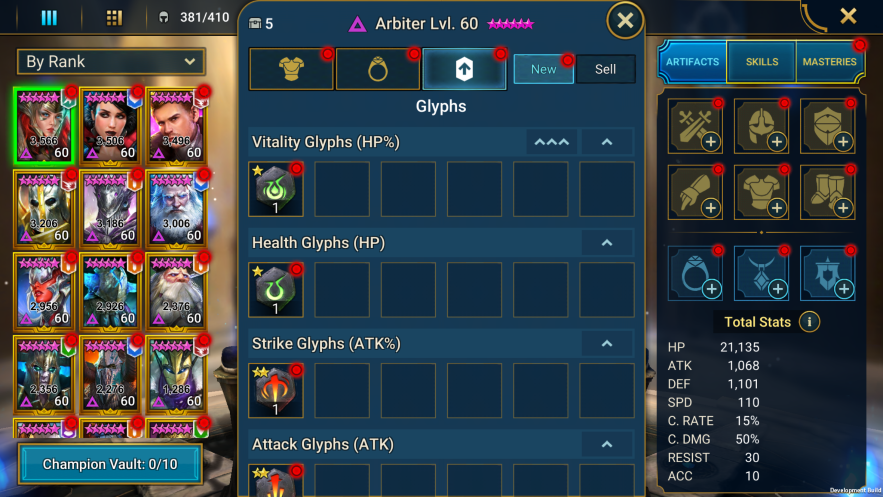 By tapping the “Sell” button, you are entering the Artifact Selling menu. From here, you can sell any Artifacts/Accessories/Glyphs you wish. “Sell” can be coupled with “New” for ease of navigation, in case you only wish to sell things that you’ve recently acquired. 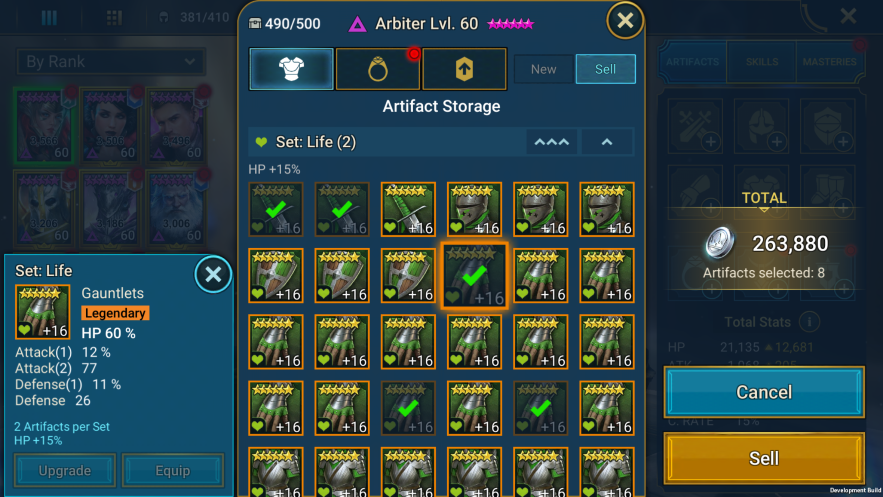 Upgrading an Artifact is also slightly different now. Rather than have 10 attempts of upgrading to the next level, you have a choice between a single attempt or having the game run these attempts until a successful upgrade (you can stop it manually).

By tapping on the Gear icon, you can also choose to upgrade the chosen Artifact/Accessory to one of the Milestone levels (4, 8, 12, 16). By doing so, you let the game run Upgrade attempts until the Artifact either reaches the desired level, or you run out of Silver. 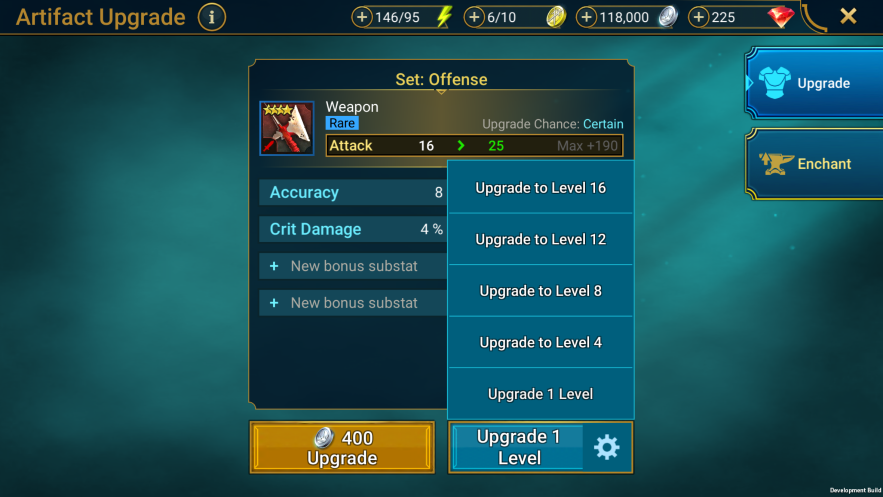 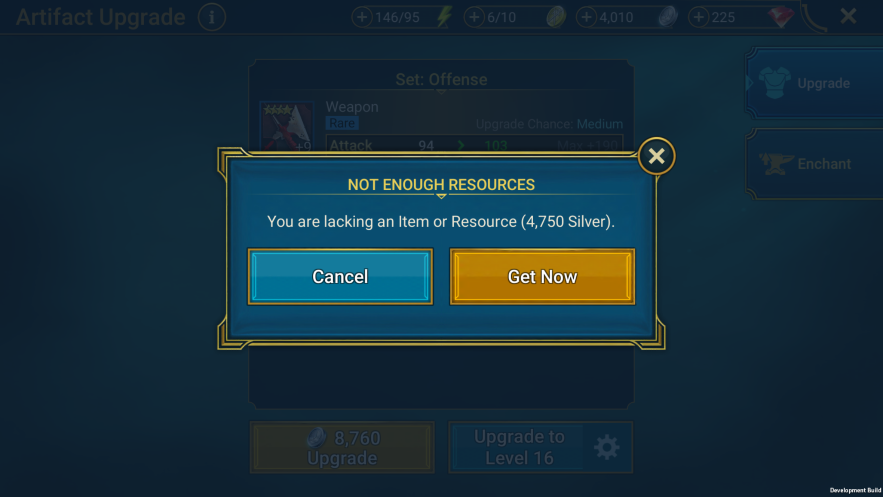 The second tab of the Artifact Upgrade menu is Enchant (see Glyphs), where you can use available Glyph to upgrade the Substats of your Artifacts or Accessories. 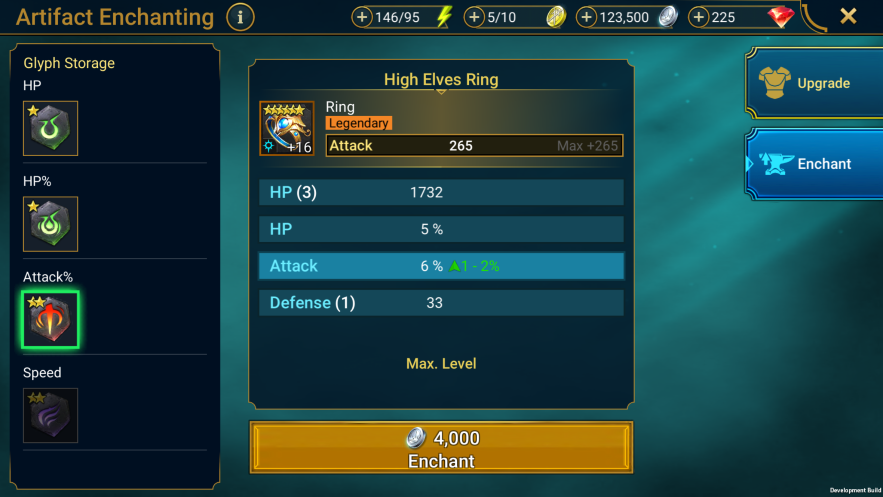